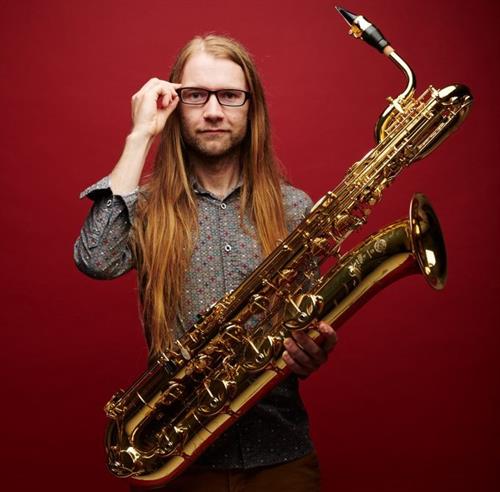 Phil Pierick is a saxophonist, improviser, singer, and educator based in Chicago. Equally at home performing a range of music from Renaissance motets to 21st-century works, he has been described as “the Swiss Army knife of saxophonists.” As a soloist and member of the saxophone duo Ogni Suono, he has performed over a hundred recitals worldwide, including teaching engagements at many of America’s leading university music programs. Classically trained and experimentally minded, Phil is dedicated to championing the diverse body of vibrant works written for the saxophone in the past century. An emphatic advocate for music by living composers, Phil has commissioned more than twenty-five new works and presented over fifty premieres throughout Europe, North America, Taiwan, Japan, and Singapore.

Phil holds a Doctor of Musical Arts degree from the Eastman School of Music, where he served as teaching assistant to Chien-Kwan Lin and was awarded both the Performer’s Certificate and Arts Leadership Program Certificate. As a 2014-2015 Fulbright Scholar, he studied contemporary performance practice in Vienna with Lars Mlekusch, presenting contemporary music concerts in unexpected locations. He holds Bachelor and Master of Music degrees from the University of Illinois at Urbana-Champaign, where he studied with Debra Richtmeyer and held the position of saxophone teaching assistant. Phil also studied in Paris with Jean-Michel Goury as a recipient of the 2009 Frank Huntington Beebe Fund for Musicians.

Free-will donations are given entirely to participating musicians in our concert series. You can also support our Commuter Concert series through the designated option on our Online Giving page.